When MS Trust supporter Tim Sorrell signed up to his first parkrun, somewhat reluctantly, he could never have imagined the positive difference it would make to his life. He explains what makes it so special.

When I was younger, I loathed running.  Running was something that I was occasionally made to do at school. I walked as often as I thought I could get away with it and I simply couldn’t imagine why anyone would want to do this sort of thing voluntarily. Fast forward a few years, and I think it’s fair to say that teenage me is very surprised and disappointed by what I’ve become. Most weekends, I am up even earlier than my work day alarm clock to voluntarily take myself out for a run.  Sundays are usually long run days, but Saturday is parkrun day.

I ran before my diagnosis with MS, but it was always a purely defensive measure done reluctantly to try and limit the damage caused by suddenly stopping all other forms of exercise and discovering beer. You wouldn’t imagine that there could be any reason to be grateful for a diagnosis of MS, but in my case, it helped me to find a grit and determination that I didn’t know was there.  For some reason, the fact that a widespread numbness and pins and needles was making running more difficult made me more determined than ever to do it, and I went quite quickly from being a fairly casual jogger to being a fully paid up member of a running club and the kind of person who runs marathons. I have lost a lot of strength on the left side of my body and most of the dorsiflexion in my ankle: distance running perhaps isn’t the most logical thing for me to be doing, but apparently that’s what I’m determined to do. It helps me to feel free and gives me a sense of achievement. MS has taken a lot of things out of my life, but I’m damned if it’s going to take this from me just yet.

Getting involved in your local parkrun as a volunteer or participant, will introduce you to the most wonderful community

I discovered parkrun quite late: why would I be interested in a timed 5km every Saturday morning? The idea of beasting myself against the clock before breakfast every weekend just didn’t appeal.  Then I actually went along and discovered that parkrun is so much more than that, it’s a whole community waiting to welcome you. Before too long, I discovered that I enjoyed volunteering more than I did running. That sense of satisfaction that you’re helping to create such a positive and welcoming environment is so nourishing.

Parkrun is genuinely accessible: whether you run, walk, jog or volunteer, there’s a role for you. At my parkrun, we’re proud of the fact that our event average time is getting slower – this means that we’re becoming more inclusive and encouraging more and more people to start their parkrun journey. The PROVE project at parkrun is also taking active steps to try and encourage participation even further.  At my parkrun in Colwick, we’ve got a long and proud track-record of supporting visually impaired runners, and it is my great pleasure to often act as a guide runner for some genuinely inspiring individuals who don’t let their loss of sight stop them from taking part in a sport they love.

Not everyone with MS is going to be able to run marathons – although some will – but I think that getting involved with your local parkrun, as a volunteer or participant, will introduce you to the most wonderful, supportive and life-affirming community of people.

I can’t really even begin to explain how much of a positive difference parkrun has made to my life, but I’m excited for everyone to find out for themselves how the parkrun magic can transform their lives, both physically and mentally. 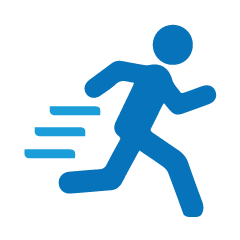 Our runners make a huge contribution each year to help fund our work for people living with MS. Find out about some of the ways in which we will support you through your sponsored run.