There are many myths and misconceptions around MS, which can be frustrating for those who live with it. In this guest blog, Ian writes about his experience of how different people react to his MS.

I just needed to get something down on paper, or in this case a hard drive, to record a small part of my life with primary progressive multiple sclerosis which will be referred to as PPMS from now onwards as my numb hands and stinging fingers aren’t keen on typing the full thing.

I did set up voice activated dictation on my computer, a lifetime in I.T. means I tend to try and find the easy way around computer problems, but it was translated, as I watched the screen with confidence in the sure and certain knowledge that my life would be so much easier without having to type every single word and then go back to correct virtually every one, to ‘Pulmonary  Incest   Nipple Postage’ and, as far as I am aware, I don’t suffer with that yet. I’ll mention it to my neurologist next time I see him. See what he thinks?

So, to the crux of the matter: telling others that you have PPMS is, I believe, a lot harder on me than it is on them.

A typical scenario would involve me meeting someone who I haven’t seen for a month or so. For background, I walk only short distances with two sticks, I appear drunk and unstable, my arms are weak and I have to pause for frequent breaks and, given the previous information I feel I cope with it remarkably well. My general demeanour is one of an angry drunken sarcastic man who is struggling to stay awake. You get the picture. Anyway, where were we? Oh yes, meeting a friend.

‘Hi Ian (we’ll use Ian as it’s my real name and it makes things easier. I don’t like it but it’s something I can’t be bothered to change now so whatever. I digress). What have you done to your leg?’

‘Hi [Random Moronic Friend], nothing I have MS’

‘Oh God no! What actually is that? I think my Aunt/Uncle/Sister/Brother/Cat/Mother had that and it was awful’.

At this stage, shortly after I was diagnosed, I used to attempt to placate RMF (Random Moronic Friend; remember? Do try to keep up) with sentences designed to put them at ease and reduce their feeling of worry and apparent concern.

‘What are you going to do eh?’

‘If it wasn’t this it’d be something else’

You get the idea.

I am also interested in trying to educate people about MS, its various forms, and the fact it isn’t, as far as I know, contagious, doesn’t condemn you to a wheelchair within 48 hours from diagnosis, and doesn’t immediately require me to have 24 hour care and a prosthetic leg.

This ‘counselling of others’ continued for several months until; let’s call her RMF#1, after a period of meeting her once, six months previous, and making the explanations about my general inability to walk like a normal human being, we bumped into each other again.

RMF#1 ‘What’s the matter with your leg?’

‘Your leg. What’s the matter with your leg?

At this stage I doubt myself. Prior to diagnosis I was utterly and completely 100% in charge of my mind, faculties, and abilities to recall pretty much anything. I had a razor wit, of which I was immensely proud, which granted me without any perceptible delay, an answer to pretty much everything. I’d have replied with a caustic and frankly extremely rude but very clever and funny comment and simply moved on, muttering about people in general and their insurmountable stupidity. Damn I was good.

MS has changed all of this. My memory has degraded as has my ability to string a sentence together. Not all of the time though. That would be far too straight forward, but occasionally, often towards the end of a day when I’ve been particularly active – you know, walking to the toilet a couple of times or fetching a coffee. I’ll be asking my partner, the lovely ‘Mrs Ian’ about how her. . . ‘Day’. Mrs Ian will fill the gap, and then answer her own question. It’s a system and, for the time being, it seems to work. Telepathy next I suppose. I’m quite looking forward to it.

I’m always grateful for any respectable article about PPMS. Stuff from the BBC or Sky News, TV documentaries I should record. It’s all good stuff. I am grateful. What bothers me is the diet recommendations, ‘my Gran just ate celery and cobwebs and it cured her’

Anyway, I’m rambling. Back to my dilemma regarding RMF#1. I’m probably looking at her with an expression akin to a cat that’s just been offered a Brussel sprout. My thought process, somewhat slowed by various lesions within my brain (I have pictures you know)  something like – ‘FFS! What did she just say? Cow! We did this! (Did we?) I’ve gone through all this. (Have you?) Coffee six months ago, we were in (pick any well-known high street coffee shop) and I/she paid (who paid?).

So it is with a huge effort and massive character adjustment that, somewhere within my brain, blows another ‘frustration synapse’ and I reply, ‘I have MS’.

I don’t know why this bothers me so much. Don’t get me wrong I have some family and friends that ‘get it’. They are loving, helpful and supportive people who I couldn’t frankly manage without.

As I see it (all opinions expressed are those of the author and do not necessarily reflect those of the management) there appear to be three groups of people, possibly four. We’ll see where this goes.

There are four groups of people that would consider themselves ‘Friends of Ian who has PPMS’.

Group #1. These wonderful people, my friends and family, need no further introduction. I won’t go into further detail but, suffice to say I know any of them would help me with anything. Unreservedly. I love them all.

Group #2. I guess most people have ‘an inner circle of friends and family (Group #1) and then a more peripheral group. People who kind of get it, make all the right noises, but don’t wish to get involved. I’ve had the ‘I have PPMS’ conversation with them once and they recall it. We revert to ‘Hi, how are you?’ ‘I’m fine how are you?’ conversation so beloved of people who fundamentally don’t really give a rat’s ass about each other. And that’s fine. I can live with that.

Group #3. Ah my personal favourite. The absolute diamonds in your life. (This one tends to trigger my sarcasm reflex so bear with me). You must know of them. The people you have the ‘I have chronic illness conversation’ with and then… simply nothing.

It’s akin to them being beamed up and transported back to their comfortable life where everyone has the latest mobile telephone, they all live in glorious houses with pools and air conditioning, and nobody gets ill.

They leave a vacuum and, if I’m being honest here, and I believe I am, an intense feeling of disappointment. These people can really damage you, not by their selfish and frankly unforgivable attitude, but by their ability to make you doubt yourself. I got ill. It wasn’t my fault. It’s not contagious. Other than the fact I walk a bit funny and tire easily (there’s other stuff about bowels and bladders and some vision stuff but, hey don’t worry yourself) I’m exactly the same person as I was before. I remind myself that the actions of other people should not be able to make me feel bad. If you really have a problem with me being ill and you’re unable to deal with it, just say so. Don’t let a friendship of many years, all those laughs and enjoyment in each other’s company go to waste. We could always just text…

Group #4. I didn’t think there was another group. I really didn’t. I toyed with the idea of just finishing at 3. Conveniently it would have concluded, almost exact, two A4 pages of Calibri 11 pitch. My OCD side would have been sated and all would have been well with the world. Moving on.

There are people that want to cure me, which is nice.

I am also interested in trying to educate people about MS, its various forms, and the fact it isn’t, as far as I know, contagious, doesn’t condemn you to a wheelchair within 48 hours from diagnosis, and doesn’t immediately require me to have 24 hour care and a prosthetic leg.

There is however, not a single remotely medical person within this collection of people. Don’t get me wrong, I’m always grateful for any respectable article about PPMS. Stuff from the BBC or Sky News, TV documentaries I should record. It’s all good stuff. I am grateful. What bothers me is the diet recommendations, ‘my Gran just ate celery and cobwebs and it cured her’ and the exercise advice, ‘get active, walk more, lift weights, take up boxing – it’s good for coordination’.

OK, I exaggerate a little, but not much. Some of these statements, particularly around the exercise may be suitable for an individual with relapsing remitting MS where there are periods of inactivity with the disease, I don’t know, but for someone with PPMS the symptoms are constant. There are no relapses. Every day is the same or worse than the last. Some articles differentiate the different types of MS. Most don’t seem to view it with any importance and this spreads ignorance and increases the number of people in Group #4. Not really their fault is it?

Well, that’s me. All done. Hopefully you may have grinned, sympathised, or recognised some or all of the above. If you have MS, whatever wonderful strain life has seen fit to throw your way, I hope you can live with it. I know it aches, burns, frustrates, limits, and messes with your head. I really hope you can live with it. I personally refuse to lie down and admit defeat. Except for now. Now I’m going to lie down for a bit to recharge my draining batteries… because I’m knackered.

An introduction to what MS is, how common it is and some of the facts and misunderstandings surrounding the condition. 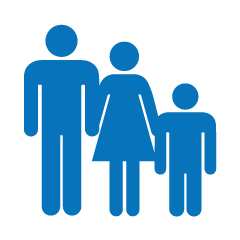 Telling people about your MS

When you have just been diagnosed with MS, you'll need to think about who to tell. This information looks at who you need to tell, as well as the people you may want to tell.